Posted on October 30, 2021 Posted By: Chrisl Categories: Wisdom of Solomon 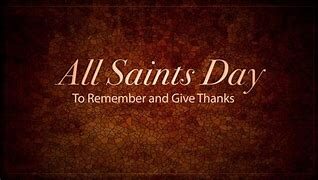 This Sunday, Covenant will be observed as “All Saints Sunday.” “All Saints Day” is Monday, November 1st.  We will create a wall of remembrance in honor of our “Great Cloud of Witnesses” who have died during this pandemic with a special “All Saints Litany.”

Some years ago, a group of Christians from the United States visited war-torn Nicaragua during it’s more turbulent times.  During the Communion service they were visiting, there was a pause. The congregation was silent. Then someone called out a name. In one voice everyone responded, “Presente!” Another name was called out. Once again, the response was, “Presente!” During the service at least several names were called out and each time the same response: “Presente!” Ron DelBene, the pastor leading this group of Christians did not understand what was happening until he heard the name Oscar Romero. Bishop Oscar Romero had been the Archbishop of San Salvador. As such, Bishop Romero spoke out against social injustice and violence amid the escalating conflict between the military government and insurgents that led to the Salvadoran Civil War.  In 1980, Bishop Romero was shot and murdered by an assassin while celebrating Mass.

It was a that moment in hearing a name he recognized and knew was dead, that the American Pastor realized that all the names were those of persons who had died. From that moment on he joined in shouting, “Presente!”

In Spanish speaking countries, “Presente” is used by school children to answer roll call. In America I grew up answering “Present.”  However, at the Lord’s table the word “presente” means “in our midst” or “present with us.” Shouting “Presente!” in this worship service was a way of proclaiming the reality of the communion of saints. Although those persons named had all died, their presence and influence were still felt.  This Sunday, we will call Mama Dorothy’s name as Covenant’s newest Saint, for though her earthly life has ended, she remains in our midst and present with us.

Join us for a special “All Saints” Service this week in person, Zoom or Facebook Livestream.”  My sermon will be “PRESENTE!”  based on “Wisdom of Solomon 3:1-9” and Hebrews 12:1-2.”