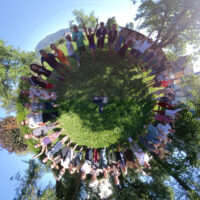 This Sunday is the Fifth Sunday of Kingdomtide. It is also the 21st Anniversary of my becoming Covenant’s Pastor. I’m grateful for the blessing it has been for me to serve as Covenant’s pastor these years. I believe and trust that Covenant has a future as a great church beyond my current pastorate.

There was a tribe of Indians who lived along ago in Mississippi. They lived next to a very swift and dangerous river. The current was so strong that if somebody happened to fall in or stumbled into it, they could be swept away downstream. One day the tribe was attacked by a hostile group of settlers. They found themselves with their backs against the river. They were greatly outnumbered and their only chance for escape was to cross the rushing river. They huddled together and those who were strong picked up the weak and put them on their shoulders; the little children, the sick, the old and the infirm, those who were ill or wounded were carried on the backs of those who were strongest. They waded out into the river, and to their surprise they discovered that the weight on their shoulders carrying the least and the lowest helped them to keep their footing and to make it safely across the river.

In Jesus’ object lesson teaching, Jesus is asking them and us, “Have you lost the childlike joy and love and faith that once were yours?” For Jesus, true greatness is measured by our response towards, and help rendered to those whom He called “the least of these.”  Also, “if you want to walk on secure ground in this world it helps to carry someone with you.”

Join us Sunday for worship in-person, by Zoom or Facebook Livestream. My sermon is “Measuring Greatness,” based on Mark 9:33-37.